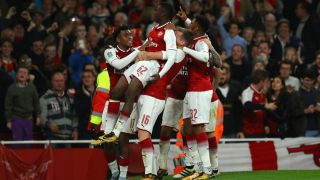 Arsene Wenger hailed the contribution of 18-year-old Eddie Nketiah, who came off the bench to score twice against Norwich City and book Arsenal's spot in the EFL Cup quarter-finals.

Nketiah was introduced in the 85th minute at the Emirates Stadium with his side trailing to Josh Murphy's cool first-half finish.

The youngster made an immediate impact, equalising with almost his first touch to send the game into extra time.

He then ensured the headlines would be his in the 96th minute with a superb header from Mohamed Elneny's corner to secure his side's place in the next round.

"He showed great anticipation in the box to score and that's a quality that you cannot teach at that age," Wenger said.

"I like the second goal that he scored because he's not tall and he got very high – it shows that he's a guy who wants it."

Wenger made 11 changes from the side that beat Everton 5-2 at the weekend and says his decision not to name any senior players on the bench was a deliberate ploy so that he would be forced to blood some of his youngsters.

"This is the competition every year that we decide to educate young players who have good potential," he added.