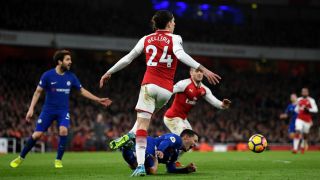 Arsenal boss Arsene Wenger described the decision to award Eden Hazard a penalty in their 2-2 draw with Chelsea as "farcical".

The Belgium star equalised from the spot in the second half of a pulsating clash at the Emirates Stadium after Hector Bellerin caught the sole of his boot when stretching to clear the ball from the Arsenal box.

Marcos Alonso then scored a second for the visitors before Bellerin atoned with a brilliant strike in second-half injury time for the Gunners, who had taken the lead through Jack Wilshere in the 63rd minute.

Wenger was left incensed at the decision to award West Brom a penalty in Arsenal's 1-1 draw at The Hawthorns last Sunday and was slapped with a Football Association charge after confronting the officials.

The 68-year-old, who later confirmed he will contest the charge, has risked further aggravating English football's governing body after suggesting his side have been unfairly treated since the start of the season.

"It was a good game and overall I believe it could have gone both ways," he told Sky Sports. "We were first on the scoresheet and after that we again got a farcical decision.

"It looked like, mentally, we were shot and we could have lost the game but we had the resources to come back to 2-2. In the end, maybe it's a fair result.

"We know what we get. Look since the start of the season; it is what we have to take. We cannot influence that.

"You ask me if it's a penalty, I say it's a farcical decision. You can give 10 penalties like that per game.

"When you come here, you see football. Unfortunately, the games are always spoiled by factors you can't master.

"You can only do one thing - to continue to play the way we want to play and hope that, at some stage, things will go for us."

Wenger called for the introduction of video assistant referees (VAR) following the draw with West Brom in a bid to drag English football out of what he considers to be "the dark ages" of officiating.

However, when asked if VAR would have helped with the decisions on Wednesday, he replied: "I don't know. For me, at the moment, I'm too upset to speak about that.

"It's all opinions. But when your opinions go the same way, statistically, what is repeated is not a coincidence."