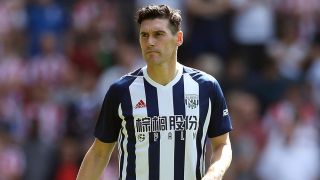 Arsene Wenger claims Arsenal wanted to sign Gareth Barry from Aston Villa in 2009 but were outmuscled financially by Manchester City.

Barry won the FA Cup and league title during a successful five-year spell with City following a reported £12million move from Villa in June 2009.

The 36-year-old will set a new record of 633 Premier League appearances if he plays for West Brom in Monday's clash with the Gunners at the Emirates Stadium.

Wenger has hailed the midfielder's longevity and says only City's greater financial power stopped him from signing the player eight years ago.

"I believe it's an outstanding achievement," he told a news conference. "He's a player who's determined, strong in the challenge and I personally always rated him highly and he was a bit unlucky with England because he was in the period of [Steven] Gerrard, [Frank] Lampard.

"We were interested in him, yes, when he went from Villa to City. But at the time, City was the big investor. Their financial potential was superior to us at the time."

Monday's meeting with see Kieran Gibbs face his old club for the first time since his move to the Baggies last month, and Wenger expects the full-back to be fired up to impress.

"Of course, it will be strange to see him in a different shirt because he's a player who was educated here from a very young age," Wenger said. "I'm sure he'll have great motivation and a huge influence at West Brom.

"He became an international here and made a good career here. I believe Arsenal are very proud of that and Kieran Gibbs can be proud.

"He has been bothered a few times when he was in front of other players. He had some fitness worries and that stopped him here.

"We didn't offer him a new deal and that's why he decided to go."

Wenger hopes Mesut Ozil, who has missed Arsenal's last three games with a knee injury, will be in contention to face West Brom.

However, he says striker Danny Welbeck is still expected to be out of action until after the next international break.

"He's in training and he'll come back to team training today or tomorrow [Friday]," Wenger said of Ozil.

Wenger added on Welbeck: "He has a groin injury and his target is Watford [on October 14], after the international break. He won't be available for England."