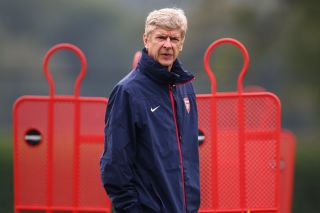 Wenger insists he will be as prudent as ever in the wake of splashing the cash to lure midfielder Ozil from Real Madrid on deadline day in September in a deal that more than doubled the previous record amount that Arsenal had paid for a player.

The decision by the club's board to sanction the outlay a transfer fee of in excess of £40million for the Germany international was applauded by Arsenal supporters who have grown restless at a reluctance to follow in the footsteps of rival Premier League sides by spending big.

Wenger, though, is keen to quash any suggestions that Arsenal will now flex their financial muscles regular in future transfer windows.

"The (transfer) policy is exactly the same - I always want to bring the best players in here, world-class players, at the best possible price," Wenger told the club's official website.

"The (Jack) Wilsheres, the (Aaron) Ramseys, the (Kieran) Gibbs - these kind of players have to be the culture of the club.

"Then on top of that we want to bring world-class players who will help us to be even stronger."

Signing a player of the quality of Ozil – who has made an instant impact with a string of eye-catching performances – sent out a statement of intent by Arsenal.

Wenger added: "It’s a big responsibility to spend that amount of money.

"It's as simple as that.

"I had a huge sense of responsibility when we built the stadium to get the club through it without going bankrupt.

"The first years were difficult, and also explained why we lost some players.

"Now we are in a more comfortable financial position, I - more than anyone - want the great players to play for Arsenal. If we have to spend the money to do that, I will spend the money."