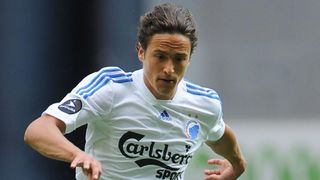 Werder Bremen have completed a deal to sign Thomas Delaney from Copenhagen, with the player to make the move in January.

The Bundesliga side confirmed on Wednesday that they have struck a deal to sign the 24-year-old - the captain of the Danish champions - and he will become their player from January 1, 2017.

Denmark international Delaney, 24, has spent his whole professional career to date with Copenhagen since making his debut in 2009.

The midfielder told Bremen's official website: "I am very proud to be moving to such a famous club in January and to be playing in the Bundesliga.

"I want to take up a position of responsibility in the team. However, until the winter, I will continue to give my all for FC Copenhagen."

Done deal! Thomas will join during the winter break from More to follow... August 17, 2016

Bremen sporting director Frank Baumann was thrilled to recruit a player who possesses both youth and experience.

"We are very pleased that Thomas has decided to move to Werder," he said.

"He is a player with a lot of potential, who is the current captain of FC Copenhagen and will therefore bring a lot of leadership experience despite his young age.

"Due to the huge interest in Thomas, we decided to act now on a winter signing."

Delaney is Bremen's 10th signing for the 2016-17 season, with Max Kruse and Niklas Moisander among their other additions as they look to replace the likes of Jannik Vestergaard and Anthony Ujah.