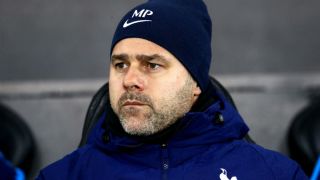 Mauricio Pochettino dismissed the idea that Tottenham's less hectic festive schedule gave them an advantage over Swansea City, insisting that Spurs are simply a better team.

Much has been made by some managers in recent days about the packed Premier League schedule around the turn of the year, with some teams playing two matches just 48 hours apart.

Pep Guardiola, Jose Mourinho, Antonio Conte and Alan Pardew are among those to have spoken out, with the West Brom manager even suggesting that his club had lodged an official complaint.

But Pochettino does not think the fact Spurs had three full days of recovery more than Swansea had any impact on their 2-0 victory at the Liberty Stadium on Tuesday.

Mauricio: "I think we played well and deserved the victory. The conditions weren't the best to play football, but the effort was fantastic." January 2, 2018

"I think the result speaks for itself, a win," Pochettino told Sky Sports. "We're better than Swansea.

"It wasn't our physical condition that was an advantage, we just played better, created more chances than them and deserved the victory.

"But after the game we're pleased because the conditions really were terrible for playing football. The effort was great."

Fernando Llorente scored the first goal on his return to the Liberty Stadium, as the Spaniard was given his maiden Premier League start in a Spurs shirt due to the recent illness of Harry Kane.

But Kane did come on in the 68th minute and played a vital role in Dele Alli's late clincher, with Pochettino praising his impact.

"I think that we did well with him, because we saw that it was difficult for him to run," Pochettino added.

"But it was a good training session for him to prepare for the next game, so hopefully he's okay in the next 24 hours and he's ready to start.

"He is a complete player. He doesn't only score, he creates, builds, hold the ball up. He's a complete striker."