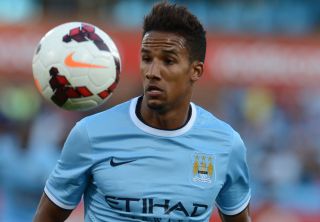 Sinclair has experienced a tough time at the Etihad Stadium since his arrival in August 2012, with just three starts during the whole of the previous campaign in all competitions.

And the arrivals of Jesus Navas and Stevan Jovetic at City only appear to have further limited his chances under Manuel Pellegrini.

In his first Premier League campaign - with Swansea City - Sinclair scored eight goals in 38 games and West Brom boss Steve Clarke, formerly a coach of his at Chelsea, is confident the winger can recreate that form.

"Scott understands he needs to play football and it will be good to work with him again," Clarke told the club's official website. "We’re delighted he feels this is the right club for him at this stage of his career.

"He is the type of player we were missing from the squad.

"He is a pure winger, who is quick, direct and scores goals – he has proven that over his career.

"He can play off the right or left and improves our attacking options.

"I know him well and he is a good person, who I know is 100 per cent committed to our cause.

"He is frustrated he did not get the chances to play at Man City last season and hopefully he will take those frustrations out on Premier League defenders this season."

Sinclair becomes the fourth new signing at The Hawthorns as Clarke aims to improve on their eighth-place finish last season.