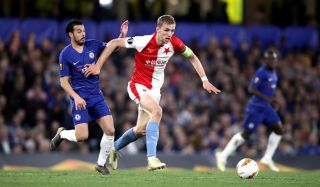 West Ham have completed the signing of midfielder Tomas Soucek on loan for the remainder of the season.

The Czech Republic international joins from Slavia Prague and the Hammers have the option to make the deal permanent in the summer.

We are delighted to confirm the arrival of Czech Republic international Tomas Soucek on an initial loan deal, with an option to make the transfer permanent in the summer.#WelcomeSoucek— West Ham United (@WestHam) January 29, 2020

Soucek, 24, has 20 senior caps and becomes the second addition to David Moyes’ squad at the London Stadium following the return of goalkeeper Darren Randolph.

“We are delighted to welcome Tomas to West Ham United,” Moyes told the official website.

“I think that he gives us a lot of different qualities, but most importantly he fits the profile of the player we want to bring to the club.

“He is young and hungry but with an established pedigree and proven talent.”

Despite being a defensive midfield player, Soucek has hit 31 goals in 111 league appearances for Slavia, where he was also the club captain.