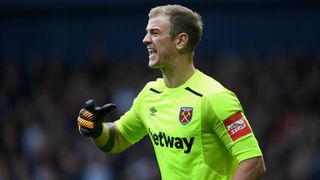 Bilic withdrew top-scorer Javier Hernandez when the scores were level in the 78 minute, a decision that was met by a chorus of boos at the London Stadium.

The home side had been largely ineffectual up to that point and seemed on course to continue their poor start to the campaign until Hernandez's replacement, Diafra Sakho, poked in Athur Masuaku's cross in the 90th minute.

Despite securing a much-needed three points, Hart believes the Hammers supporters were within their rights to criticise the performance.

"We are relieved of course. It was a strange game that understandably won't get much airplay," the England shot-stopper told Sky Sports.

"It was a difficult atmosphere in some ways. I'm never going to criticise the fans, they come here and pay their money and have a right to their opinion.

"It was not a high-quality performance. I was not high quality today."

Bilic, whose team are now out of the bottom three, pointed to his substitutes as key to influencing the result, but acknowledged his side's lack of intensity in the first 45 minutes as deserving of frustration.

"To keep the support of the crowd we need to keep producing minute after minute and we did not do that in the first half," he said.

"The changes were crucial with Manuel Lanzini, Masuaku and Sakho coming on.

"The guys on the bench lifted the team and crowd."