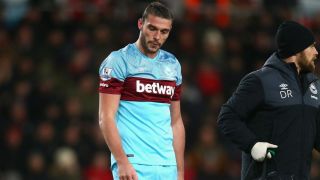 West Ham have confirmed striker Andy Carroll is expected be out for a month with a hamstring injury.

The former Newcastle United and Liverpool forward sustained the blow in West Ham's 3-1 Premier League win over AFC Bournemouth on Tuesday, limping off after just 15 minutes.

And the England international, whose spell at Upton Park has been plagued by fitness problems, will be on the sidelines until February.

"The results show an injury to his hamstring, which is expected to keep him out of action for a month.

"Carroll’s absence means Slaven Bilic is likely to use either Enner Valencia or Nikica Jelavic in the Hammers attack for Saturday’s trip to Newcastle United."