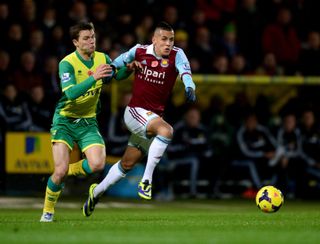 The Dutchman worked with the 20-year-old during his stint on the backroom staff at Manchester United, and now looks to have made the attacking midfielder one of his January transfer targets.

However, after watching his side cruise to a 3-0 FA Cup third-round replay victory over Norwich City, Meulensteen revealed his initial approach had been rebuffed.

"Yes, we did (put in a bid for Morrison) but we got knocked back," he said. "We need to review it and move on.

"I'll leave it with (Fulham chief executive) Alistair Mackintosh. I'll have to wait and see what happens."

Questioned on whether Morrison wants to join Fulham, Meulensteen added: "Yes, because I have known Ravel for a long long time. The thing is we have to wait and see how the clubs and everything goes. We'll see what we get.

"The fee is not for me to discuss. I'll leave that to Alistair Mackintosh.

"I've made my desires clear and will leave them to it. We'll review it because I don't know the ins and outs of how it has been rejected."

Fulham progressed to the fourth round of the FA Cup on Tuesday after goals from Darren Bent, Ashkan Dejagah and Steve Sidwell stretched their unbeaten run against Norwich to 15 games in all competitions.