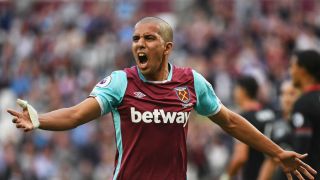 Sofiane Feghouli has had the red card he received during West Ham's 2-0 defeat to Manchester United overturned.

The 27-year-old was facing a three-match, but West Ham appealed against the punishment to the Football Association (FA) and Feghouli will now be eligible for Friday's FA Cup third-round tie at home to Manchester City.

"The West Ham United player was sent off for serious foul play during the game against Manchester United on Monday 2 January 2017. The standard three-match suspension has, therefore, been withdrawn with immediate effect."

Monday's match versus United was still 0-0 when Feghouli was ordered from the field by Dean, with Juan Mata and Zlatan Ibrahimovic on target for the visitors after half-time.

"I was very surprised," said West Ham manager Slaven Bilic after the match. "You know me, I'm the first one who says [referees] have a difficult job, and every time we look at a slow motion I go: 'Yeah, they don’t have that in real time.'

"But I said it then – I wouldn't have been happy with a yellow. I said it to the fourth official and to [Jose] Mourinho, it's not a yellow. If it was yellow I'd be asking: 'Why a yellow so early in the game for basically nothing?’ And you have to know it's Feghouli – he very rarely makes a foul.

"After the game, when I saw it, it gave me proof that I'm right. The more times I've seen it, it's the other way round. It was Jones who made a more dangerous tackle than Feghouli, like a scissor.

"He got the ball, okay, but that was dangerous. Maybe his reaction was to save himself, but definitely not a red card."