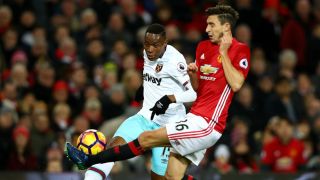 West Ham have confirmed that striker Diafra Sakho will be out for six weeks with a thigh injury.

The Senegal international was forced off in the second half of the 1-1 Premier League draw at Manchester United on Sunday and was sent for tests in London.

The club have now announced that the 26-year-old, who scored inside two minutes at Old Trafford, is not likely to return until the new year.

"Diafra Sakho will be out for six weeks after sustaining a thigh injury during Sunday's draw with Manchester United," West Ham said via their official website.

"A scan on Tuesday revealed that the injury will keep him out of contention for up to six weeks.

"Everyone at West Ham United wishes him a speedy recovery and quick return to action."

The news is a blow to manager Slaven Bilic, whose side meet United in the EFL Cup quarter-final on Wednesday before a league game against Arsenal on Saturday.

Andy Carroll is expected to return to action this week for the first time since August after recovering from a knee problem, although Bilic is wary of starting him in both matches this week.