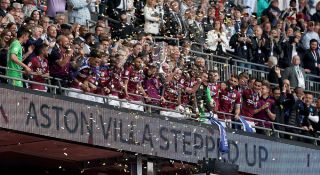 Aston Villa were promoted back to the Premier League following their 2-1 win over Derby in the Sky Bet Championship play-off final at Wembley.

Here, Press Association Sport looks at what manager Dean Smith and the club’s owners need to do in preparation for next season.

Smith will now be confident of keeping captain, talisman and hometown hero Jack Grealish, who was on the verge of joining Tottenham last year but stayed to lead his boyhood club to promotion. Grealish had one of his quieter games at Wembley but he clearly has Premier League pedigree and will be absolutely pivotal to their chances next season.

Villa’s new owners have the money and, now, the top-flight status to potentially make star loanees Tammy Abraham and Tyrone Mings permanent additions. Striker Abraham might be needed at Chelsea but Bournemouth centre-half Mings, who put in a superb performance against Derby, is surely one to keep. Axel Tuanzebe and Wembley goalscorer Anwar El Ghazi will also be hopeful of permanent deals.

To every single one of you who has backed us this season…— Aston Villa (@AVFCOfficial) May 27, 2019

Smith has managed to reunite a club which was on its knees as it slid towards the drop three years ago. A previously fragmented fanbase who jeered their team towards relegation were out in force and firmly behind their side in jubilant scenes at Wembley. A pumped-up Villa faithful is a fearsome sight and should be worth an extra point or two next season.

The £170million play-off windfall can be invested in the squad but the Villa hierarchy must be wary of the Fulham effect – the Cottagers spent £100m last summer and were relegated with a whimper. Smith must pick the right players, and the right characters, to enhance his squad rather than overhaul it.

Since the Premier League was formed in 1992 just 11 of the previous 27 play-off winners have stayed up the following season. In the last 10 seasons only Swansea, West Ham, Crystal Palace and Huddersfield beat the drop, and two of those have since been relegated. For the optimists among the Villa faithful, five teams (Blackburn, Ipswich, Leicester and West Ham twice) have been promoted via the play-offs and then finished in the top 10.