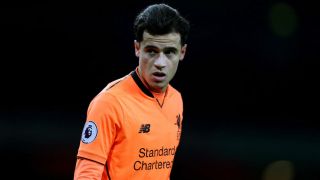 Philippe Coutinho's move from Liverpool to Barcelona could reportedly cost his new club a whopping £142million once add-ons are included.

But what will the leaders of LaLiga be getting for their money?

We use Opta data to look at Coutinho's Premier League record during his time at Anfield.

ASSISTS APLENTY, BUT NOT THE PL'S TOP PROVIDER

In 152 league appearances for Liverpool, Coutinho scored or assisted a goal on 76 occasions - an average of once every two games.

Only Steven Gerrard (92) and Steve McManaman (58) can boast more Premier League assists for Liverpool than Coutinho, who laid on 35 goals for his team-mates while scoring 41 of his own.

The Brazil international never contributed more than seven assists in a Premier League season, although he was firmly on course to do so this term after supplying six in 14 appearances prior to his Liverpool exit.

That feeling when signs for Barça...Show us your reaction with a GIF!January 6, 2018

Coutinho's return of 21 goals in 107 Premier League appearances across his first three and a half seasons at Liverpool could hardly be described as prolific.

And his ratio of goals to appearances has been better again this term, Coutinho scoring seven goals in 14 league outings.

97 – Since his debut in February 2013, Philippe Coutinho has been directly involved in more goals in all competitions than any other Liverpool player (54 goals, 43 assists). Impact.January 6, 2018

Since Coutinho made his Premier League debut, no player can beat his tally of 19 goals from outside the box. Christian Eriksen (15) and Yaya Toure (14) are his nearest rivals in this regard.

Coutinho's haul of five goals direct from free-kicks in the same period of time is topped only by Eriksen and Gylfi Sigurdsson (both 6).