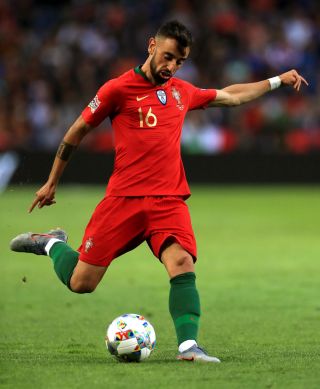 Here, the PA news agency looks at what the 25-year-old will offer United.

United will hope the Portugal international can provide a link between their defensive-minded midfield and their attack which, while potent on the counter, can often seem isolated. Despite often starting on the right of midfield for Sporting, Fernandes is a free-roaming, goalscoring attacking player who makes runs on either side of the field and into the box. His passing and ability to spread play have caught the eye and he is often prepared to drop deep to pick up possession.

Fernandes’ style has been compared to that of Frank Lampard and his hunger for goals appears to match that of Chelsea’s record scorer. He is one of the top scorers in Portugal despite playing in midfield and last season registered 20 goals in the league. He has scored eight from 17 appearances this term, as well as a further five in the Europa League.

“Some are born great, some achieve greatness, and some have greatness thrust upon them".— Sporting Clube de Portugal (@Sporting_CP) January 29, 2020

Fernandes is the complete package as he creates as many chances as he scores. Last season he averaged a goal or assist per league game, clocking up 33 in 33 appearances (20 goals, 13 assists), while he has 15 in 17 this term (eight and seven).

At the age of 25, Fernandes already has experience of Serie A as well as the Portuguese Primeira Liga and probably feels ready for the Premier League. He came through the youth ranks at Boavista and played at Pasteleira on loan before taking a chance on joining Italian side Novara at the age of 17. From there he progressed to Udinese and then Sampdoria before returning to Portugal with Sporting in 2017. He has won the Portuguese Cup and two League Cups with the Lisbon club, for whom he has also been captain. He is a Portugal international and represented his country in the 2016 Olympics.