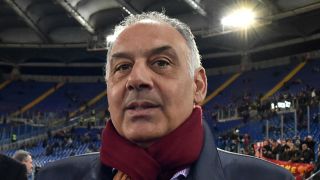 Roma president James Pallotta has mocked a UEFA suspension that sees him banned from the dressing room for European matches for three months.

UEFA announced Pallotta's suspension on Friday, the American punished over comments he made after his side's Champions League semi-final defeat to Liverpool.

Pallotta called for VAR to be introduced in the Champions League and complained about "embarrassing" refereeing decisions as Roma exited 7-6 on aggregate despite a 4-2 win at home in the second leg.

Roma's president said he was "dying of laughter" after UEFA charged him and Pallotta did not appear to be taking his ban - which also prevents him from entering the tunnel - seriously either.

"If I'm not allowed in the locker room, not sure where I get my pre-match massage?" Pallotta said in a quote reported on Roma's Twitter account.

UEFA appeal incoming from Pallotta“If I’m not allowed in locker room, not sure where I get my pre-match massage?” July 20, 2018

Roma's pre-season campaign continued on Friday with a 1-1 draw against Serie B side Avellino in Frosinone.

Roma finished third in Serie A last season, qualifying for the Champions League as a result.