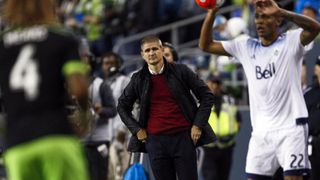 VANCOUVER – Nearly two weeks after revealing a deal for a new right back was in the works, Vancouver Whitecaps FC head coach Carl Robinson remains hopeful that a transaction can be completed in a matter of days.

The Blue and White are keen to add depth on the right side of the team's defensive backline after trading Steven Beitashour to Canadian rival Toronto FC last month. On-loan Jordan Smith is currently Vancouver’s lone natural option at right back, heading into the 2016 campaign.

Reports in Scotland have linked the Whitecaps with a loan move for Rangers youngster Fraser Aird, though Robinson would not be drawn on speculation regarding the Canadian international.

“If not, we’re going to have to move on, but the other club has been very helpful with it, and it’s just a little bit of a time thing.”

While Robinson has a focus on adding new faces, his Whitecaps squad has made a low-key start to preseason at the University of British Columbia (UBC). Vancouver will train at UBC this week before embarking this Sunday on an extended trip to Tucson, Arizona, for the 2016 Desert Friendlies. The 10-day spell will include friendly games versus Cascadia Cup rival Seattle Sounders FC, New England Revolution, and Houston Dynamo.

One player that has enjoyed the first couple of days is rookie centre back Cole Seiler. The 21-year-old, who was selected 16th overall by the ‘Caps in this year’s MLS SuperDraft, is eager to learn the ropes as a professional.

“I think it’s awesome,” the Georgetown University product told Goal Canada. “The players have been very welcoming and it’s been a very good first couple of days. The coaches are trying to facilitate a positive communication environment between the players and the coaches. I’m open to anything, and in any way, to help the team.”

While Japanese striker Masato Kudo has immersed himself in his new club and city this month, midfielder Christian Bolaños has another week to wait before meeting his new Vancouver teammates in Arizona.

Considered a key offseason acquisition, goalkeeper David Ousted knows full well what the experienced Costa Rican international can bring to the Whitecaps, having played against the former FC Copenhagen winger in his native Denmark.

“I think he’s going to be a great addition to this squad,” said Ousted. “He brings quality and a veteran presence to keep some of these young guys in check. Assist wise, he can set up other players, but he can also score goals himself.”