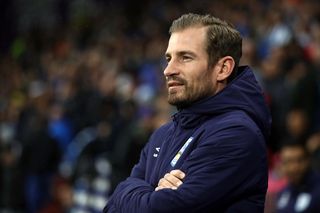 Huddersfield have sacked manager Jan Siewert after failing to win any of their first three Championship games following relegation from the Premier League.

Town were beaten 2-1 by Fulham on Friday night, the final act in Siewert’s seven-month spell in charge, which yielded just one win.

Here, the PA news agency looks at some of the potential candidates to replace the German at the John Smith’s Stadium.

Sacked by Brighton despite keeping the club in the Premier League, Hughton is one of the most experienced managers at this level who is currently out of work. After steering Newcastle to promotion from the Championship with 102 points in the 2009-10 campaign, Hughton took Birmingham into the play-offs and managed Norwich in the Premier League before being handed the reins at Brighton in December 2014. He took the south coast club into the top flight before successfully avoiding relegation twice.

Former Terriers captain Hudson stepped into a coaching role with the club’s academy after retiring as a player in 2017. He took caretaker charge of the senior side for one game following David Wagner’s departure in January, before becoming first-team coach under Siewert. The 37-year-old could be the man to steady the ship as Town look to climb up the table.

The 40-year-old is available following his June departure from Birmingham, where he kept the club in the Championship last season despite a deduction of nine points for a breach of the English Football League’s profitability and sustainability rules. He knows the Championship well, having also managed Leeds and Middlesbrough following his stint in charge of Swansea in the Premier League.

Rowett enjoyed success with both Burton and Birmingham before guiding Derby to the Championship play-offs in 2018. His latest spell in English football’s second tier did not go quite so well, with Stoke showing him the door in January after less than a year in charge.

DC: "We should not underestimate the level of achievement on Tuesday night. We are a very small squad in numbers but we are full of work ethic, determination and enthusiasm."#ImpsAsOnepic.twitter.com/fwJYnCZ4sH— Lincoln City FC (@LincolnCity_FC) August 16, 2019

Lincoln manager Cowley’s stock, and that of his brother Nicky who is his trusted assistant, continues to rise after success lower down the leagues with the Imps, who won the Sky Bet League Two title last season. Cowley’s Lincoln have taken well to life in League One, winning both of their opening games to sit second in the table, as well as claiming a 1-0 victory at Huddersfield in the Carabao Cup. The 40-year-old has proven himself in uncharted territory over and over again, and perhaps he has done enough to convince the Town hierarchy that he is capable of stepping up once more.