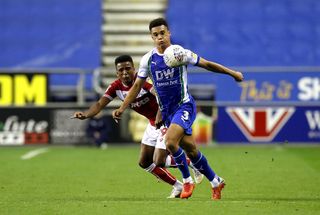 Antonee Robinson is excited at the chance to play regular first-team football after ending his 10-year stay at Everton to join Wigan.

The 21-year-old left-back, who joined Everton when he was 11, has agreed a three-year deal with Paul Cook’s side.

“I’m really happy to be back now,” Robinson told the club’s website.

“It does feel a bit like the first day of school after the summer holidays seeing everyone again. I’m delighted to be back with the lads.

“The finish to the season was brilliant. I felt like I was playing well and we got some great results, so it would have been nice to play a few more games and get even further up the table, but overall it was really enjoyable.

“I’ve had 10 years at Everton, so it’s difficult leaving, but this year since Leighton Baines got his new deal, I was told I wouldn’t get the game time that I wanted. They were quite amicable in accepting that I needed to leave and I’ve been very happy with how it’s all been handled.

“It’s important for me as a 21-year-old to play every week, especially for a club and a manager who wants me to play. I feel like I can develop here and the gaffer spoke to me and said exactly that.”