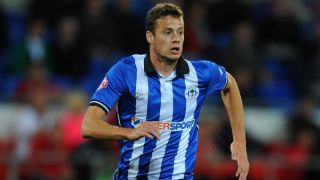 The 28-year-old was signed by Wigan in June but has struggled to make an impact in the Championship, with a solitary goal to his name from 13 appearances.

However, Deportivo are offering the former Barcelona B and Celta Vigo forward a lifeline with Wigan confirming Riera's desire to move via a statement on their website.

"Wigan Athletic can confirm that 28-year-old Spanish striker Oriol Riera has travelled to Spain to undergo a medical with a view to joining Real Club Deportivo de La Coruna on loan until the end of the season," the statement read.

"Contrary to media reports, the transfer is still not completed at the time of going to press and the club can only confirm the news officially when signed paperwork has been received back from Real Club Deportivo de La Coruna and the transfer can be ratified formally by the relevant governing bodies."

Wigan paid a reported £2 million for Riera over the summer but he has been deemed to be surplus to requirements by new boss Malky Mackay, who is willing to let the striker leave on a permanent basis at the end of the loan spell.