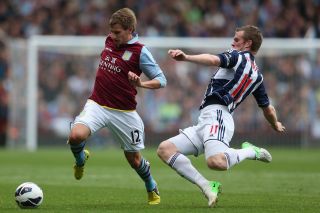 The Championship club have secured the 23-year-old's services in time for him to face QPR on Wednesday.

And manager Owen Coyle was delighted to bring a player with Premier League experience into his squad.

"Marc has shown what an outstanding player he is time and again in the Premier League, and he is someone I have tried to sign in the past, so I'm delighted to bring him on board to strengthen our squad," he told the club's official website.

"He's at a young age with the potential and scope to get even better; he's quick, dangerous and pleasing on the eye and I feel he's going to really enhance the attacking options we have at Wigan Athletic, particularly in light of Shaun Maloney's absence."

Albrighton has been restricted to just one appearance this season, in the 4-0 home defeat to Tottenham in the League Cup last month.

He has played more than 80 times for the club since making his debut as a teenager in a UEFA Cup tie against CSKA Moscow in 2009.

His arrival will help plug the gap left by Maloney's absence after the Scot was ruled out for at least three months with a hip injury.