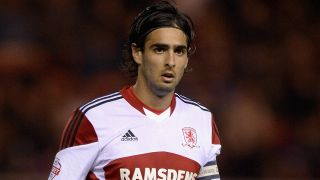 Williams will visit a specialist in London this week before undergoing surgery, almost certainly ruling him out of a second successive World Cup campaign after missing the trip to South Africa with a pelvic injury in 2010.

The 25-year-old sustained the injury during Middlesbrough's goalless draw with Wigan Athletic at Riverside Stadium on Wednesday morning (AEDT).

Play was halted for several minutes as a tearful Williams required oxygen and a leg brace after falling awkwardly before half-time.

Williams, who was reportedly close to joining Scottish Premier League champions Celtic this week, spent the night in hospital on Tuesday.

He was assessed on Wednesday, with the full extent of the injury then confirmed by the club.

The news is another big blow to Australia coach Ange Postecoglou, who has already lost star attacker Robbie Kruse to a season-ending anterior crucial ligament injury.

It poses another headache for Postecoglou, who was hoping to have Williams in the heart of an Australian defence that has come in for heavy criticism.

With captain Lucas Neill so far unsuccessful in his search for a new club, Postecoglou may turn to the likes of in-form Western Sydney Wanderers defender Matthew Spiranovic, Alex Wilkinson, who was called up for Australia's friendly against Costa Rica in November and Ryan McGowan to lead his back four in Brazil.

The injury may also open the door for Central Coast Mariners young-gun Trent Sainsbury or another surprise candidate.