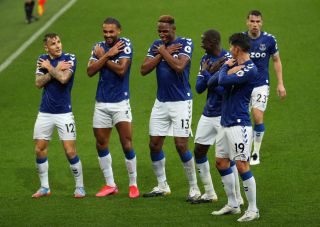 The Premier League takes a two-week break as international football returns with a rare triple-header for the British nations.

Here, the PA news agency takes a look at the winners and losers of the Premier League season so far.

Four straight wins, 12 goals scored and top of the table – the blue half of Merseyside have bagged the early-season bragging rights over their Liverpool neighbours in making their best start since 1894. Carlo Ancelotti has overseen a Goodison Park revolution, with summer signings Abdoulaye Doucoure, Allan and James Rodriguez all hitting the ground running. Dominic Calvert-Lewin has scored six goals to win an England call-up, while one of the only concerns has been the form of goalkeeper Jordan Pickford.

Dean Smith’s Villa survived by the skin of their teeth on the final day last season. But just two months on it is a new-look Villa with a 100 per cent record after three games. Goalkeeper Emiliano Martinez has brought authority following his move from Arsenal, Matty Cash has made his mark at right-back and Ollie Watkins’ hat-trick against Liverpool was a clear sign the former Brentford forward can cut it at this level. Add the on-loan Ross Barkley to Jack Grealish’s creativity and Villa are now a serious attacking proposition.

Leeds seem determined to make up for lost time after spending 16 years outside the top flight. Marcelo Bielsa’s side were given a tough opening hand, with Liverpool and Manchester City – last season’s top two – and a trip to Yorkshire rivals Sheffield United among their first four games. But Leeds have shown no fear – testing Liverpool to the limit in a 4-3 Anfield defeat, drawing 1-1 with City and beating Sheffield United and Fullham. Spain striker Rodrigo is an inspired signing at the sharp end of a typical ‘Bielsa-ball’ high-energy team.

Concerns off the pitch over a summer of slow transfer activity at Old Trafford have been matched by events on it. United were off the pace in an opening home defeat to Crystal Palace and defensive deficiencies were exposed again in a fortunate 3-2 win at Brighton. Things got worse in a 6-1 home defeat to Tottenham – United’s joint-heaviest of the Premier League era. Some last-minute transfer window shopping is likely, but Ole Gunnar Solskjaer’s mood will not be eased with Chelsea, Paris St Germain, RB Leipzig and Arsenal looming on the fixture list.

Burnley finished 10th last season as a team spirit envied by most in the Premier League took them into the top half for the second time in three years. But how long can a team punch above its weight? Sean Dyche’s small squad have been stretched by injuries and the season so far has been dominated by talk of England defender James Tarkowski leaving. Dyche, who has spent eight years at Turf Moor and is the Premier League’s longest serving manager, has challenged the board to show a clear vision, but the Clarets are in the relegation zone after three defeats.

The Blades were a breath of fresh air of last time out, when Chris Wilder’s side were in the race for European football until three season-ending defeats. It is a hangover they have been unable to shake off in losing to Arsenal, Aston Villa, Leeds and Wolves. Goals have been a major problem, with only one to date. Rhian Brewster has been brought in from Liverpool for a club-record £23.5million fee to score goals, but that is big pressure on 20-year-old shoulders. The worry for Wilder is that Sheffield United have been worked out after last season’s heroics.