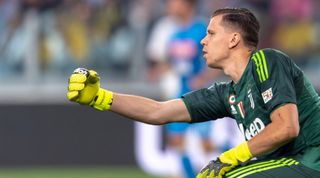 The goalkeeper joined the Turin club from Arsenal in the summer of 2017 after a successful two-year loan spell at Roma.

Goal has reported that there was a chance of the Pole returning to the Premier League during the summer transfer window.

Manchester United made enquiries into the goalkeeper’s availability amid uncertainty over the future of David de Gea.

The Spaniard was heavily linked with a move away from the club as he entered the final year of his contract, with PSG among the interested parties.

However, De Gea has since penned a new four-year contract with the Red Devils, which is likely to end any interest in Szczesny.

Despite that, the Italian champions will open negotiations over a contract renewal for the 29-year-old, whose current deal expires in 2021.

United’s interest sparked concerns in Turin that other teams could make efforts to sign him on a free transfer if he is allowed to enter the final year of his contract.

After spending his first season as the back-up to Gianluigi Buffon, Szczesny established himself as the club’s undisputed No.1 last term, helping Juve to their eighth consecutive league title.

He has retained that role despite Buffon’s return from PSG over the summer and Juve intend to offer him a deal until June 2024.

The Poland international’s salary is likely to increase from his current €3.5 million per year earnings.

A busy period of negotiations is set to begin at Juve; Juan Cuadrado and Blaise Matuidi are the most pressing cases, as they are already in the final year of their deals.

Szczesny has kept two clean sheets in five Serie A appearances for Juventus so far this season.

Maurizio Sarri’s side rose to the top of the table with a 2-1 win away to Inter before the international break.