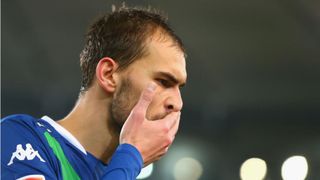 Wolfsburg striker Bas Dost is set for at least six weeks on the sidelines after suffering a broken metatarsal during training.

Netherlands international Dost has scored seven goals in 16 Bundesliga appearances this season following a prolific campaign last term, although he has only started 10 matches in 2015-16.

The 26-year-old had been linked with a January transfer to Premier League team Newcastle United but he will not be expected to move now with an operation likely.

"At the moment, we expect Bas will have to undergo surgery," Wolfsburg sporting director Klaus Allofs told his club's official website.

"We had some very positive talks with Bas just before the injury and the result of those discussions was an enormous drive to press on.

"It's very unfortunate that his plans have now been disrupted. We wish Bas all the best for a speedy recovery."