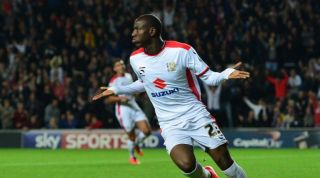 Wolves boss Kenny Jackett revealed on Sunday that a fee had been agreed with the FA Cup holders for Afobe and the player was set to undergo a medical.

The West Midlands outfit confirmed on Wednesday that Afobe has sealed a move to Molineux on a three-and-a-half year deal.

Afobe, 21, has impressed during a fruitful loan spell at MK Dons this season, scoring 19 goals in all competitions - including two in a stunning 4-0 thrashing of Manchester United in the League Cup.

Wolves' head of football development Kevin Thelwell told the club's official website: "Having now met Benik he seems like a really outstanding young man and is the right sort of person for us. And of course also the right player, who I think is going to fit very well into our system.

"He is very pacy and powerful, good technically, and has an outstanding goalscoring record.

"He is young and fits the sort of profile we are going for and we are really excited about him signing.

"I am sure he is going to work really hard for us and be a success here in helping us get to where we want to be."

Afobe, who has also had loan spells with Huddersfield Town, Bolton Wanderers and Sheffield Wednesday, could make his debut in Saturday's clash with bottom-of-the-table Blackpool.