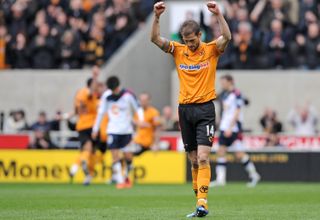 The Premier League side have been hampered by a host of injuries this season, particularly at the heart of defence.

With James Collins, Winston Reid and James Tomkins among those unavailable, West Ham boss Sam Allardyce has seemingly turned to Johnson as a short-term alternative.

The 30-year-old, who has been on loan at Championship side Sheffield Wednesday since September, has previously played in the Premier League for Birmingham City and Wolves, who are now in League One.

Confirming Johnson's switch to Upton Park, Jackett told the Express and Star: "It is just a loan deal at the moment and the finances are structured around him playing – how many appearances he makes and whether they are successful.

"It's a really good opportunity for him because he's going to a Premier League club.

"It's a really good chance for him to build on what he has done at Sheffield Wednesday."

Johnson could make his West Ham debut at Manchester City on Wednesday, in the first leg of a League Cup semi-final.

Allardyce's men sit 19th in the Premier League, having won just one of their last 13 games, although the manager received the backing of co-chairmen David Sullivan and David Gold on Monday.