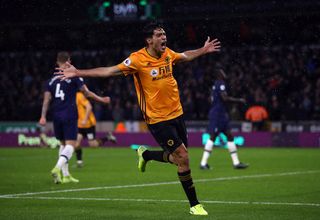 Raul Jimenez has revealed Wolves’ Champions League ambitions and declared they can join the European elite.

The striker believes the club can spring a major shock and reach Europe’s top table.

Nuno Espirito Santo’s side are fighting for fifth spot in the Premier League and have reached the last 16 of the Europa League.

Fifth could earn a Champions League place after Manchester City’s European ban while the Europa League winners will qualify.

Wolves travel to fifth-place rivals Tottenham on Sunday and, with two chances to reach the Champions League, Jimenez knows it has to be a goal.

“I’m proud of the team and what we are doing, the Champions League is achievable,” said the Mexico international.

“We know that we have to be proud of ourselves because we are fighting for that.

“We have to be patient, intelligent in all the games.

“It’s a very big dream for us. I think we deserve that because we’ve been working hard and playing very well.”

Jimenez was an unused substitute in Thursday’s 3-2 Europa League defeat at Espanyol as Wolves progressed to the last 16 with a 6-3 aggregate scoreline.

They face Olympiacos, who beat Arsenal in the last 32, and Jimenez believes Wolves must target winning the competition.

“We have to be thinking we can touch the sky. It’s possible.

“If we do it, it’s going to be amazing. If we don’t I’m still proud of this team.

“We are confident against anyone. If we want to be the champions of the tournament then we have to be confident that you can beat anyone.

“There are some very good teams but if you want to lift the cup you have to be able to beat anyone.”

Jimenez, who has 12 Premier League goals, will return to the starting line-up to face Tottenham on Sunday with Spurs a point ahead in the table.

He added: “It’s a very important game. We are fighting for the Champions League or Europa League positions and we know we have to do our best and keep doing that and win the game.

“Tottenham are close to us. We need to be intelligent to have a good performance.”