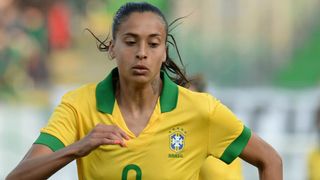 Andressa Alves was on target as Brazil edged Spain 1-0 to book their spot in the Women's World Cup last 16 on Saturday.

Alves struck a minute before half-time, pouncing on a defensive error to inspire Brazil to back-to-back wins in Group E.

The 2007 champions top the standings with a perfect record heading their final group match and will become the only country to win its group at the last five World Cups after Costa Rica and South Korea played out a dramatic 2-2 draw.

Costa Rica are second with two points from as many matches, while Korea and Spain both have a point apiece.

Meanwhile, it was an historic day for Colombia, who recorded their first World Cup victory via a shock 2-0 win over France.

Lady Andrade and Catalina Usme were the heroes for Colombia.

England accounted for Mexico 2-1 after a scoreless first half.