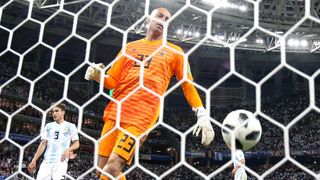 Nizhny Novgorod was a city closed to foreigners until 1990, but it has thrown open its doors to visitors from around the globe in the first week of the World Cup.

Fans from Sweden, South Korea, Argentina, Croatia, England and Panama have descended on the confluence of the Volga and Oka rivers in huge numbers, along with travellers from Colombia, Mexico, Japan, China and even India.

The action on the pitch has seen a nightmare outing for Argentina and goalkeeper Willy Caballero, as well as a record-breaking victory for England. VAR has, of course, also made an appearance.

Away from the pitches, we've seen matches on the beach, giant pandas halting traffic and even a tapir predicting results to come. Below are just some of the highlights.

World Cup 2018: A panda, a tapir and a nightmare for Willy in Nizhny