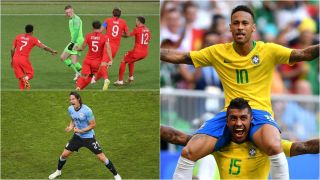 Some of the usual heavyweights rub shoulders with surprise packages in the quarter-finals of the 2018 World Cup, which get under when France take on Uruguay in Nizhny Novgorod on Friday.

That mouth-watering clash is followed by another packed with prime talent as Brazil face a Belgium team on the other side of their great escape against Japan.

On Saturday, with their penalty shoot-out hoodoo slain for now, England meet Sweden in Samara before hosts Russia aim to extend their dream run against perennial dark horses Croatia.

Along with the eight teams, five of our reporters remain in Russia. Here's who they think will go all the way.

We're at the business end of the World Cup now and I haven't seen a stronger side than Brazil. They look to have all bases covered - bundles of talent up front, an excellent protective barrier in midfield and a rock-solid defence, all superbly coached by Tite. There are no obvious weaknesses and, although they're in the much tougher half of the draw, they're my pick for lifting the trophy for a sixth time in Moscow on July 15.

With the QF line-up complete, my prediction for who will lift the on July 15:Because my pre-tournament choice went really well July 4, 2018

I'm going for my neighbours in Nizhny Novgorod over the last three weeks, Uruguay. They have the world's best centre-back, Diego Godin, in exceptional form. He's also lifting the performances of those around him, especially Jose Gimenez and Diego Laxalt.

They also have Luis Suarez and Edinson Cavani, a duo capable of scoring against any opposition. Granted, Cavani will probably miss the game with France, but they coped fine in qualifying when the Paris Saint-Germain star was absent. Oscar Tabarez has been there so long, and these players have played in so many past finals together, that the unity in the team is supremely strong. Get past France, and they could be unbeatable.

We’re down to the last eight, so it’s time to predict the outright winners. I’ve gone for my neighbours in Nizhny Novgorod July 4, 2018

Streetwise Real Madrid midfielder Casemiro being suspended for a World Cup quarter-final should be a cause of mild panic. Brazil will just pick Fernandinho, who would probably waltz into any other side left in the competition. It serves as a handy demonstration of the strength in depth Tite has at his disposal that should mean a sixth world title for the Selecao.

They have been operating with third and second choices in the full-back positions of late, but a defence expertly marshalled by Thiago Silva has not conceded since the tournament opener against Switzerland. And, largely due to the attention drawn by his relentless histrionics, Neymar moving back towards peak form has perhaps not drawn the plaudits it should.

It's predictions time for the lads.I've decided to be startlingly original No point cursing England now, eh? July 5, 2018

After eliminating Cristiano Ronaldo and Portugal, I think Uruguay will go the whole way. No side has looked as solid defensively as them and, although they were by no means incredible in the group stage, against Fernando Santos' European Champions they passed a serious test. Edinson Cavani's fitness is a worry, but in my opinion they are still the team that's best equipped to take on tournament favourites Brazil.

It's coming home! Those three words are trending in England as fans and pundits begin to believe that the World Cup could actually be within touching distance. I for one think they can win the entire tournament. I've been impressed with the quality of play, maturity and unity under Gareth Southgate.

There was a lot of talk about Southgate's decision to rest his stars for the final group game against Belgium but the Three Lions controlled proceedings against Colombia until a last-gasp equaliser. England, however, did manage to win on penalties, which will have given them a mammoth boost ahead of the quarter-final against Sweden.