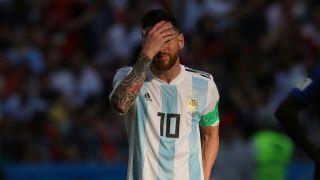 Few of Russia's host cities can rival Kazan for sheer drama in week two, as the Tatarstan capital became the end of the road for Lionel Messi, Argentina and defending champions Germany.

The week began with something of a lull, as the city recovered from several days of Colombian noise, passion and colour - the South Americans crushing Poland 3-0 last Sunday.

But when the action returned to Kazan, it couldn't have been more shocking - the world champions Germany seeing their campaign end in the first round for the first time since 1938, South Korea beating them 2-0 in dramatic circumstances.

If that wasn't enough, the most tantalising of the eight round-of-16 matches came to the Kazan Arena and it surpassed all expectations, as France and Argentina played out what will surely go down as a World Cup classic, Didier Deschamps' men winning 4-3.

It has been a remarkable week in Kazan, so relive the action in our Twitter moment below: