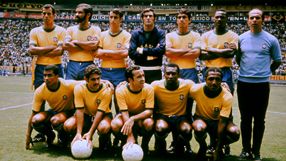 The country's social security minister called the payments "an act of justice" that recognised the role Brazil's World Cup winners played in the country's development.

Some Brazilians believe those players put the country on the world map and also established Brazil as a football power.

The 1970 team in particular, thanks to the arrival of colour television and the brilliance of players such as Pele, Jairzinho, Rivelino and Tostao, captured the world's attention and is still considered one of the greatest teams of all time.

"I think that the Brazilian people recognise the debt we owe to these athletes," Sports Minister Aldo Rebelo said.

"It is worth stressing that football back then did not offer the salaries and sponsorship deals they do today. The athletes were almost like artisans and the country cannot conceive that these people who lifted the name of the country are going through tough times," Rebelo added.

Many players said the money would transform their lives. With the exception of Pele, very few live comfortably as their careers did not earn them the kind of riches enjoyed by today's big names.

"About 85 percent of the players live middle- to lower-class existences," said Marcelo Neves, the son of twice World Cup winner Gilmar and now president of an association of former players.

"This money could be the difference between life and death. Felix [the goalkeeper in the 1970 team], who died last year, couldn't get the medical attention he deserved because he didn't have a very good health plan and the hospital he went to wasn't the best. If he had had money he might be alive today."

Neves stressed that some of the older players do not get a regular pension because football was not a recognised profession in the 1960s and they were not able to make social security payments.

"It wasn't because they didn't want to," he said. "Most of them are over 65 years of age so this money will ensure the rest of their lives can be lived out in dignified circumstances."

However, not everyone agrees the veterans deserve a special pension half a century after their heroics, much less a fat bonus.

"This is a tremendous slap in the face to all those Brazilians who have worked their whole lives and don't get that amount of money," said Atila Nunes, a radio host who has criticised the award.

Nunes said if anyone should be assisting the old players it should be the Brazilian Football Confederation (CBF), and not ordinary tax payers.

Others have asked why only winners get the pension when other players who trained and played just as hard did not. And why only football? What about champions in other sports?

One player has already rejected the money, saying even back in the 1950s and 60s football players earned higher salaries than most workers.