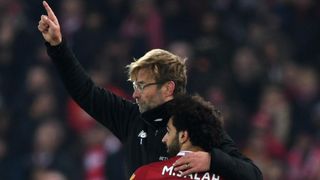 The German was typically animated during Sunday's seven-goal thriller at Anfield, where City's 22-game unbeaten league run this season was ended by the hosts.

In their first game since Philippe Coutinho's departure for Barcelona, Liverpool were indebted to goals from Alex Oxlade-Chamberlain, Roberto Firmino, Sadio Mane and Mohamed Salah.

Pep Guardiola's men fell 4-1 behind with Leroy Sane's first-half goal all they had to show for their efforts until a late flurry that saw Bernardo Silva and Ilkay Gundogan cut the deficit.

Having held on to secure a dramatic success that leaves them third and level on points with Manchester United and Chelsea either side of them, Klopp was enthused by the whole spectacle.

"You can watch it as a manager or as a football fan and I prefer to do that – wow! What a game! Two teams, full throttle," he told BBC Sport.

"This was a historical game you will talk about in 20 years because it looks like City will not lose another one this year.

"People watched this game all over the world and this is why – take your heart, throw it on the pitch and play like this, both teams.

"We played, I don't know which level, caused them problems like hell. I was not scared at the end, not that I didn't think we could concede a fourth, I have known my boys long enough now, it was so intense.

"If you combine quality with attitude you see a game like this. I really loved it.

"You will find someone who wants to talk about defending, no clean sheet, but he can blow up my boots."

City's leveller, which came just before the interval, saw Loris Karius beaten at his near post by Sane, but Klopp did not enjoy having that fact pointed out to him.

Asked if the goalkeeper was to blame, the Reds boss told Sky Sports: "Yes of course it's the corner where he was. You showed it to me. People always find the hair in the soup. Loris knows it.

"The Man City goalkeeper [Ederson] probably caused Salah's goal but nobody will talk about that."