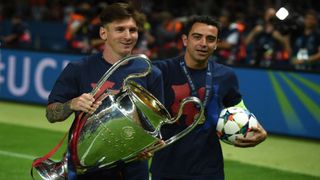 Former Barcelona captain Xavi has paid a warm tribute to Lionel Messi, who he believes is the finest footballer of all time.

Messi scooped the fifth Ballon d'Or of his stellar career in Zurich on Monday, taking back the game's most coveted individual prize from his great rival Cristiano Ronaldo.

Xavi played alongside Messi from the Argentina star's introduction into the Camp Nou first-team squad until the midfielder brought down the curtain on his own celebrated Barcelona career at the end of last season.

Writing an editorial for Spanish newspaper El Pais, Xavi remembered being transfixed by the sublime talents of a teenage Messi on the training field and impressed by his humility off it.

"You could tell he was different," he said. "Leo, above all, had a talent that is the hardest to achieve: he understood the game. He could pass well and he could dribble around anyone you put in front of him: he used to leave the best defender we had on the ground.

"A while after he came to the first team we shared a trip and I discovered an educated boy, who was respectful, humble and not conceited at all.

"And that makes him exemplary, because being what he is now, being the best, he hasn't lost those values, he hasn't lost a bit of that humility and he respects his team-mates. I think Leo never wanted to be different from the others."

Despite these initial glowing impressions, Xavi did not foresee Messi's development into an all-time footballing superstar and believes the longevity of the 28-year-old's excellence sets him apart.

"He was different, but he was only 16 years old, so I thought he'd be good, but I knew that football is very complicated, that a lot of things interfere, I never imagined he'd be the best player in history," Xavi said.

"Ever since I've known him he hasn't stopped evolving. He improved what he had and he has also turned himself into a goalscorer.

"He didn't use to score so much and now he scores everything, he takes free kicks. And, like Pep [Guardiola] says, he dominates every aspect of the game.

"We'll never see something similar. Not only because of what he can do, but because of the time that he's been doing it for.

"Others have lasted two years, three; he seems to have no end in sight."