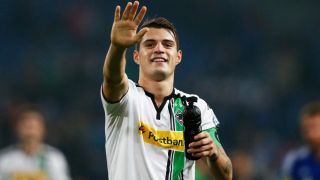 Borussia Monchengladbach star Granit Xhaka has warned he will not leave the club simply to sit on the bench for a European giant.

The Switzerland international midfielder has been linked with a host of Premier League clubs, including Liverpool, Arsenal and Chelsea, following his displays in the Bundesliga.

Gladbach sporting director Max Eberl claimed late last week that the 23-year-old, who has also reportedly been tracked by Bayern Munich, could be allowed to leave Borussia Park for the right price.

But Xhaka insists he will not give up his place as club captain and first-choice midfielder in order to warm the substitutes' bench for a major side.

"Gladbach are a top club," he told Bild. "But if I were someday to go to a top, top, top club, I want to play there. I'm not the type to be on the bench."

Xhaka has made 23 appearances in all competitions for Andre Schubert's side so far this season.