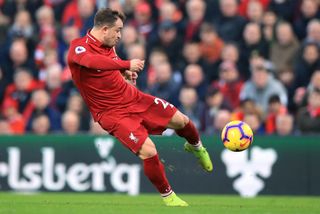 The 27-year-old moved from Stoke City to Liverpool in 2018, featuring 24 times in the Premier League last season.

Shaqiri proved a useful substitute as he scored six goals and provided three assists in a campaign where Liverpool only missed out on the title by a point.

But the Switzerland international believes there's nothing super about being a sub.

“I’m disappointed that I did not play any more,” he told Langenthaler Tagblatt (via the Daily Star).

“Nobody likes to sit on the bench.

"It’s clear that I want more time. I have to look at the situation and find a solution.”

Shaqiri has been recovering from injury at the start of this season, but he could well return in time for Liverpool's clash with Southampton.

However, another player returning from injury is Alex Oxlade-Chamberlain, who was handed a starting place by Jurgen Klopp in the UEFA Super Cup against Chelsea on Wednesday.

Glenn Hoddle says Oxlade-Chamberlain's return is a huge boost for the Reds.

Even though they’ve not bought anyone, Oxlade-Chamberlain is like having a new player," he said.

“It’s like you’ve just signed a new player and he’s already had a taste of playing for Liverpool and playing for the manager and was playing very well."

Adrian, the fan and 10 of football's weirdest injuries

Revealed! How much every Premier League club is earning from their shirt sponsorship in 2019/20