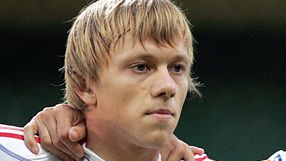 However, the full-back recognises that he needs to play more for the Russia national team first.

Lokomotiv Moscow star Yanbaev has won nine caps for his country but fears that a work permit may scupper his move to Emirates Stadium unless he becomes a regular fixture at left-back for the Russians.

The versatile 26-year-old, who can also operate on the right flank and play in an attacking role on either side, is eager to step up his game in order to attract the interest of Arsene Wenger and secure a move to the Gunners to join fellow countryman Andrey Arshavin.

"My agent told me there was interest from Arsenal, but that I didn’t have enough games for the national team,” Yanbaev said in the Mail.

"Advocaat says he doesn’t see me at left-back for the national team. I need to work hard and prove that I deserve a call-up.

"I’m willing to lose money for a move abroad. I want to play for a European club, but so far it hasn’t worked out."