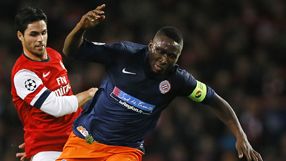 Struggling Newcastle confirmed that France international Yanga Mbiwa had signed from the French champions on a five-and-a-half-year deal after he completed a medical.

Later on Tuesday, the 26-year-old Gouffran, who has scored eight Ligue 1 goals this season, wrote on his Twitter feed: "Tomorrow I will be a Newcastle player and I am proud.

"Thanks to all who supported me, thanks to the officials and staff members who helped me grow, I needed a new challenge I hope you will understand," he added.

Yanga Mbiwa, who has three caps, is regarded as one of the top centre-backs in France. He stressed that many leading French internationals had also made Newcastle their home.

"It was a difficult decision [to leave Montpellier]; it was the club that trained me, the club where I made my debut, where I got into the first team and where we won the championship," the 23-year-old said on Newcastle's website.

"So it was difficult to leave, but Newcastle held out their hand to me, they welcomed me. One day I had to leave and it has always been a dream to come and play in England."

The north-east side have already drafted in Lille and France right-back Mathieu Debuchy in the current transfer window and Nancy full-back Massadio Haidara is poised to join the club's French contingent which includes midfielder Yohan Cabaye.

"Those players... are an integral part of the new French team that is coming through now. They're the main players who are chosen first to play for France, basically," said Yanga Mbiwa.

"So I think it is important for me to continue to be able to play with these players so they can help me to make progress in my own game - and yes, why not to continue playing for France, which is also one of my own targets and objectives."

Newcastle, fifth in the Premier League last season, are struggling in 16th place, two points above the relegation zone.

Alan Pardew has been desperate for new singings with Newcastle having been hit by defensive injuries, while his talismanic captain and centre-half Fabricio Coloccini wants to return home to Argentina according to media reports.