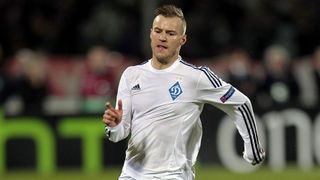 Andriy Yarmolenko has agreed a new five-year contract with Dynamo Kiev, despite reported interest from Chelsea and Everton.

The 25-year-old was linked with a move to Everton in the previous transfer window, while Chelsea boss Jose Mourinho was in the stands as he represented Ukraine in a 1-0 defeat to Spain on Monday.

Yarmolenko - whose previous deal was due to run out in June 2016 - has now signed a contract that will keep him in Kiev until 2020 and insists he is fully committed to the Ukrainian champions.

However, the midfielder admitted he is still hoping to play abroad in the future and believes the club will not stand in his way should a suitable bid come in.

"I still want that [to test myself in the best foreign leagues]. I know that if Dynamo get really worthy offers we'll find an option that satisfies everyone," Yarmolenko told the club's official website.

"I want the club to get good compensation for me. I could have left for free in a while, but that would have been wrong.

"I am 100 per cent a Dynamo player. Our team is like my second family. That's why I keep doing my best to benefit the club."