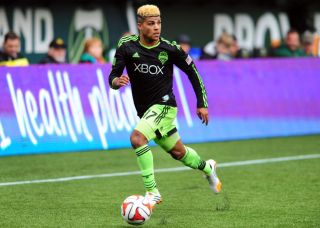 Yedlin has been linked to Tottenham this week, with reports suggesting the Premier League side were close to signing the 21-year-old defender.

Talk of an imminent switch went into overdrive on Friday after the United States international was a noticeable absentee from Seattle's training session.

And Sounders general manager Adrian Hanauer said the in-demand full-back was meeting with a team abroad, though he is expected to be back in time for Sunday's clash against Houston Dynamo.

"He's visiting with a big club in Europe," Hanauer said following reports Yedlin arrived in London on Thursday to undergo a medical.

"Obviously we're not going to give out a lot of detail but we're working toward a potential transaction."

Hanauer also revealed the Sounders were negotiating a deal that would ensure Yedlin remains at CenturyLink Field for the remainder of the MLS season.

"This wouldn't be a deal where he would be transferred and immediately loaned back," he said.