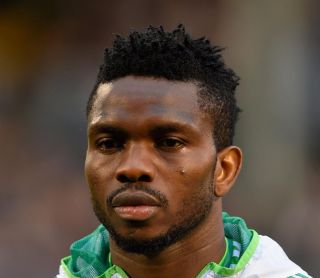 The defender is preparing for his third finals appearance, but admits he was unsure whether he would be able to travel to Brazil after fitness concerns.

The 33-year-old, loaned to Norwich City from Turkish champions Fenerbahce for the second half of last season, struggled with a persistent calf problem while at Carrow Road.

Yobo made just eight appearances for Norwich in over three months, and concedes his fitness was a worry heading into the finals.

"This is going to be my third World Cup and I wasn't fit before this time so I'm just happy now that I'm fit and ready and that gives me great joy," he told KickOffNigeria.

"Because at a point I doubted myself if I was going to make it here because of injuries.

Captain of Nigeria, Yobo is nearing 100 caps for his country, but insists any milestones are secondary to the fortunes of the team, with Stephen Keshi's men drawn in Group F alongside Argentina, Bosnia-Herzegovina and Iran.

"Any other thing that comes after playing the World Cup is an addition, a bonus," he added.

"My main focus is playing for Nigeria, doing well for Nigeria and if I achieve any landmark, it's going to be exciting and special as well."