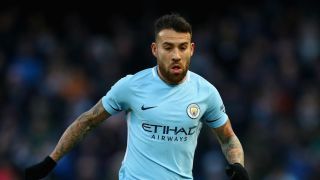 Nicolas Otamendi is thoroughly enjoying playing under Pep Guardiola at Manchester City and feels like the Spaniard is teaching him even when he is at home.

City announced on Wednesday that Otamendi had signed a two-year contract extension to tie him to the club until 2022.

The Argentina international, who leads the Premier League in completed passes with 2033, is enjoying his best season at the Etihad Stadium since arriving in 2015 and praised the impact Guardiola has had on his game.

"I think that now I have an important role because the central defenders have to build-up with the ball and make the team work as best we can. Pep has taught us how to do that," Otamendi said in an interview with CityTV.

"From the first day you work with him you learn from him, even being at home you're still learning from him. Every movement, how you need to be positioned, how you can receive the ball, all this information is in your brain and this is very important for every player. I'm very happy to be playing this kind of football.

"I think that [I've improved most] in the build-up, being able to find the correct spaces and make the right pass. This is something you train for on an everyday basis and this is what I have improved the most since last season."

Guardiola last month called Otamendi City's "Superman", but the centre-back does not feel he would be producing the level of performances he is without the Catalan.

He said: "When a manager like Pep praises you it means a lot. Since he got here I've learned a lot and I'm still learning as I said before and I'm trying to enjoy it.

"We are in a certain timeframe where we all enjoy his football, he's mad about sport and tactics. I'm really enjoying it and I'm very grateful to him because I'm enjoying playing football.

"I think that nowadays for the way I have improved I'm in a really good moment, but I can still improve. The players keep learning day by day and I try to be a better player after every single game."