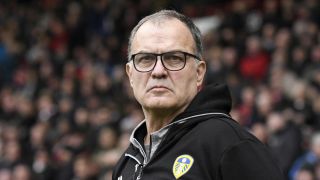 Marcelo Bielsa's explanation of the questionable scouting methods scrutinised during 'Spygate' led the Leeds United boss to reveal how his detailed dossiers once surprised even Pep Guardiola.

Bielsa accepted responsibility for instructing a Leeds employee to observe Derby County training in the lead-up to the Championship encounter between the clubs at Elland Road last Friday.

The Argentine subsequently arranged a press briefing on Wednesday in which he delivered a comprehensive presentation explaining the full process behind his extensive evaluation of opposition teams.

Bielsa's renowned dedication to his craft has earned him many admirers including Manchester City head coach Guardiola, who discovered the remarkable depth of assessment the 63-year-old undertakes following the Copa del Rey final clash between their respective Athletic Bilbao and Barcelona sides in 2012.

"When I was a coach of Athletic Bilbao we played Barcelona in [the Copa del Rey] final and we lost 3-0," said Bielsa.

"[After the match] I gave all the information I had on Barcelona to Pep Guardiola. Guardiola had a look at it and he told me 'you know more about Barcelona than me!'.

"I do this analysis to ease my anxiety, but it was useless information because they scored three goals."

| Marcelo demonstrates the analysis his team goes through for each opponent, and how it totals more than 300 hours of work pic.twitter.com/asfGA6Wadm— Leeds United (@LUFC) January 16, 2019

Bielsa admitted to spying on the training sessions of each of Leeds' rivals this term but insisted that was merely a small part of the league leaders' preparation for matches.

His level of research includes watching every game of the other 23 teams in the second tier, in-depth studies of opposition players and statistical breakdowns of favoured formations.

"We watched the 51 games of Derby County. They've played a 4-3-3 [formation] 49.9 per cent of the season... we use this to understand the system and why and when they change the system during a game.

"The analysis of each game takes four hours of work. Why do we do that? Because we think it is professional behaviour."