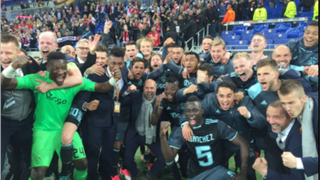 Ajax head coach Peter Bosz has called on his youthful Ajax side to make history after they progressed to the Europa League final with a thrilling 5-4 aggregate victory over Lyon.

The visitors were reduced to 10 men in the closing stages, but they held firm to claim a place in their first European final since 1996.

"Over the two legs, we deserve to go through," Bosz - whose side will face Manchester United in Stockholm on May 24 - told RTL.

"This is a super feeling. I am delighted that Manchester United will be the opponents, because that's really a great opposition.

"Now we'll see if we can really make history. A final play is nice, but finals you play to win."

Dolberg's effort looked to have all but secured Ajax's progression, but two goals in the space of 76 seconds from Lacazette put Lyon ahead at the interval.

Ajax substitute Donny van de Beek hit the woodwork in a frantic conclusion to the second-half - Ghezzal's header then deflecting in off the unfortunate Nick Viergever, who will miss the final after picking up a second yellow card late on.

And Bosz acknowledged that his side rode their luck in the contest.

"My heart was certainly beating!" Bosz continued. "We made it unnecessarily difficult, because we played great in the first half.

"Two minutes before the break, everything went wrong. I told the players, do not panic, but it was a different game in the second half. Because Lyon believed, it became difficult.

"Based on the two games though, we were better, although we still had some luck at the end. But it is done and it is very special."

Meanwhile, Lyon star Alexandre Lacazette was left to rue the injury concerns that kept him from starting the first leg, which Lyon lost 4-1.

"We weren't far away from qualifying. We weren't clinical enough in front of goal and not effective enough defensively," Lacazette said.

"Above all, we are disappointed with the way the first leg went, but we gave it absolutely everything for our supporters."