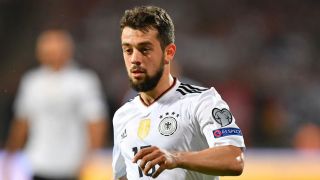 Amin Younes has rejected a January switch to Napoli and will remain with Ajax until the end of the season, the Eredivisie giants have announced.

Younes – who has six months left to run on his Ajax deal - was allowed to travel to Italy ahead of Wednesday's deadline to discuss a deal with the Serie A title contenders.

Napoli had been expected to pay €5million for the 24-year-old, but Younes has opted to rebuff their approach and see out his contract at the Amsterdam ArenA.

Ajax state "personal circumstances" were behind Younes' decision to abandon the transfer, although reports suggest he could still make the move to Naples at the end of the campaign.

"Amin thought it was better for himself to stay with Ajax and he did not have to leave us either," said Marc Overmars.

"We welcome with this decision."

Germany international Younes will rejoin the Ajax squad next week after their league clash with NAC Breda.