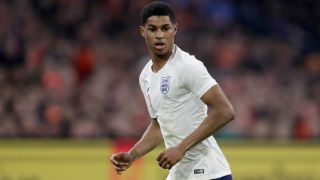 Marcus Rashford has the potential to "set the world alight" and will be a key player for England at the World Cup, according to Ashley Young.

The forward heads into only his second major tournament for his country following a difficult season at Manchester United under Jose Mourinho.

Rashford made 52 appearances in all competitions in 2017-18 but struggled to hold down a regular place in the starting line-up, while he came under scrutiny for his tame performance in the FA Cup final defeat to Chelsea.

Young, though, has no doubt his United team-mate has the potential to become one of the game's leading players, starting in Russia next month.

"It's the World Cup and it could be his stage to show everybody how far he's come since his debut," he told a news conference.

"He produces at United and will be a major player for us at the World Cup. He's going to cope really well.

"I've said it from the time I saw him in the youth team – he's got a massive future ahead of him. He's a fantastic player and if he keeps going the way he is, he'll set the world alight.

"He has his feet firmly on the ground and he wants to learn every day. He's one of them that the manager has to tell him 'come inside' because he wants to stay out and play non-stop.

"If you look at the goals he has scored on how many different debuts, it just shows he steps up in the big games."

Young has forced his way back into the England fold following consistently good performances as United's first-choice left-back.

However, the former Aston Villa man admits he still feels like more of an attacking player, despite having played in a more defensive role for much of the last three seasons at club level.

"I don't pretend, I still see myself as an attacker, especially the way that we play with the full-backs or wing-backs high up," he said.

"Different managers play different formations. I think I am one of those players who has a good footballing brain. Wherever the manager calls on me to play I will give 100 per cent for the England shirt and go to do as well as I can."