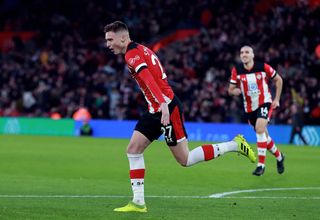 Two Southampton teenagers fired their side into the fourth round of the FA Cup in a 2-0 victory over Huddersfield at St Mary’s.

Making his first senior appearance, 19-year-old William Smallbone gave the hosts the lead in the 48th minute with a well-timed volley.

Smallbone had only featured once for the under-21s this season, in a Football League Trophy defeat to Forest Green in September, but had been named on Ralph Hasenhuttl’s bench for Saints’ New Year’s Day draw to Crystal Palace.

The home side had the ball in the back of the net in the first half, after a well-placed effort from Shane Long, but a VAR review ruled the striker offside.

Saints wrapped up all three points in the 86th minute when Jake Vokins, also aged 19, fired in from the edge of the area for his first goal of the season, in only his second senior appearance.

Southampton dominated the ball in the first 10 minutes of the match, but struggled to turn their possession into chances against a well-organised Huddersfield defence.

The Terries looked threatening the first time they got forward however, as Fraizer Campbell was fed through by Juninho Bacuna, but the 32-year-old was unable to get a clear shot away.

The Saints nearly had the visitors undone by a long ball from Kevin Danso, with the first ball only just being cleared in front of the goalkeeper, but the second time the defenders were more alert and headed the ball safely clear.

After dominating the possession for most of the first half, Southampton came close to finding a breakthrough in the 26th minute, when James Ward-Prowse drove forward before playing in Che Adams, who’s effort was straight at Huddersfield goalkeeper Joel Coleman.

Southampton’s best chance of the half fell to debutant Smallbone, who found himself with lots of space at the edge of the box, but he got underneath the ball which curled high and wide of the goal.

The home side looked to have taken the lead just before the stroke of half time, when Long went through the Huddersfield defence before placing the ball past Coleman. However, after a VAR review, the goal was ruled out for offside.

At the start of the second half, Kevin Danso drove down the right before sending in a lofted cross which Long headed down to Smallbone who volleyed in for his first Saints goal.

Less than 10 minutes after the opening goal, Huddersfield’s Bacuna sent in a dangerous free-kick and Christopher Schindler met the ball at the near post, but his close-range volley went just wide of the goal.

The Southampton defence cleared a probing free-kick, but the ball fell to Terriers defender Jon Stankovic at the end of the box, who chested the ball down but his final shot was just wide of the target.

Southampton wrapped up all three points in emphatic fashion in the 86th minute, when Vokins drove the ball into the top corner from the edge of the area.