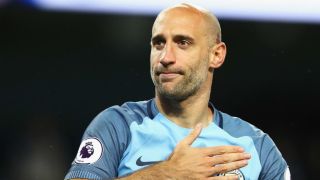 Pablo Zabaleta has challenged West Ham to develop a winning mentality and fight for trophies in the coming years.

The Argentina full-back has reached an agreement to join Slaven Bilic's side on a two-year deal and will move to London Stadium once his Manchester City contract expires on July 1.

The 32-year-old won two Premier League titles, two EFL Cups and the FA Cup during a hugely successful nine-year spell with City, but is moving to a club that last reached a cup final in 2006 and have not won a trophy since the 1999 Intertoto Cup.

But Zabaleta, who rejected offers from Spain and Italy to stay in England, wants the Hammers to believe that success is not far away.

"It is true that I got a few offers from clubs from Italy, some interest also coming from Spain and also from England," he told the club's official website.

"Of course West Ham has always been my first choice and the reason that it is a fantastic club and I have a lot of respect.

"I know Manchester City had huge ambitions as a club and of course we cannot compare both clubs at the moment, but in life you have to believe. It's all about being positive, working hard and showing commitment from the players and this is something we need to make sure we can dream together with the fans.

"It's time for this football club to have that strong, winning mentality to believe that you can achieve important things.

"With domestic competitions, of course the Premier League is hard, but the FA Cup and EFL Cup are about seven games, you need to perform well and it's only one game at a time, and that's the right and winning mentality you need to achieve.

"This is something that I personally, from my point of view, think West Ham need to believe. As players, we can give the fans something to really enjoy.

"The last FA Cup final was 2006 against Liverpool, that game they lost on penalties, and it's been 11 years, so it's been a long time and we need that confidence and that belief as players, fans, the board and everyone to make sure we can perform well enough to at least win something in the next few years."